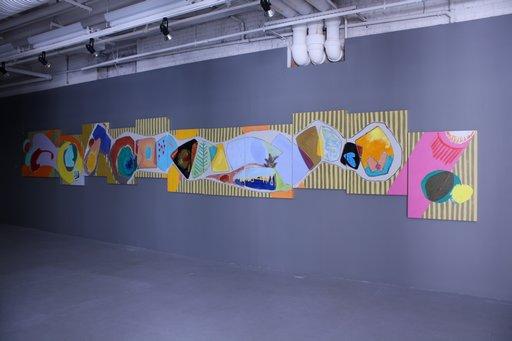 Artspace is pleased to present a solo exhibition of new and recent paintings by Patrick Chamberlain. On Your Mark is the largest exhibition to date of Chamberlain’s radiant, evocative abstract paintings. Deeply interested in the techniques of his craft, Chamberlain paints abstract pictures that present viewers with multiple points of entry into his alluring worlds. The representation of space and its psychological effects is of primary concern to Chamberlain. In many of his paintings, organic-looking forms are hemmed in by rigid geometric planes of color, and thick, bold gestural strokes serve loosely as both directional signposts and visual barriers. Any hints of illusionistic depth are subtly denied by flat areas of color, placing the pictorial just out of reach. Although Chamberlain’s work varies in scale and composition, his emotional use of color is consistent throughout. Intense areas of color announce themselves without apology: hot pinks, turquoise blues, radiant yellows, and flamingo pinks punctuate his canvases. Such boldness is often tempered by exacting line work and an attention to surface and texture that reveals deeper convictions about the conceptual processes of painting. While Chamberlain’s works frequently evoke natural forms such as waves, trees, flowers, and fields, ambiguity lies at the core of his artistic project. His imagery seems to linger “in the between” so to speak; it’s as if the subjects presented are about to fall, shrink, roll, or slip into some distant, remarkable place.