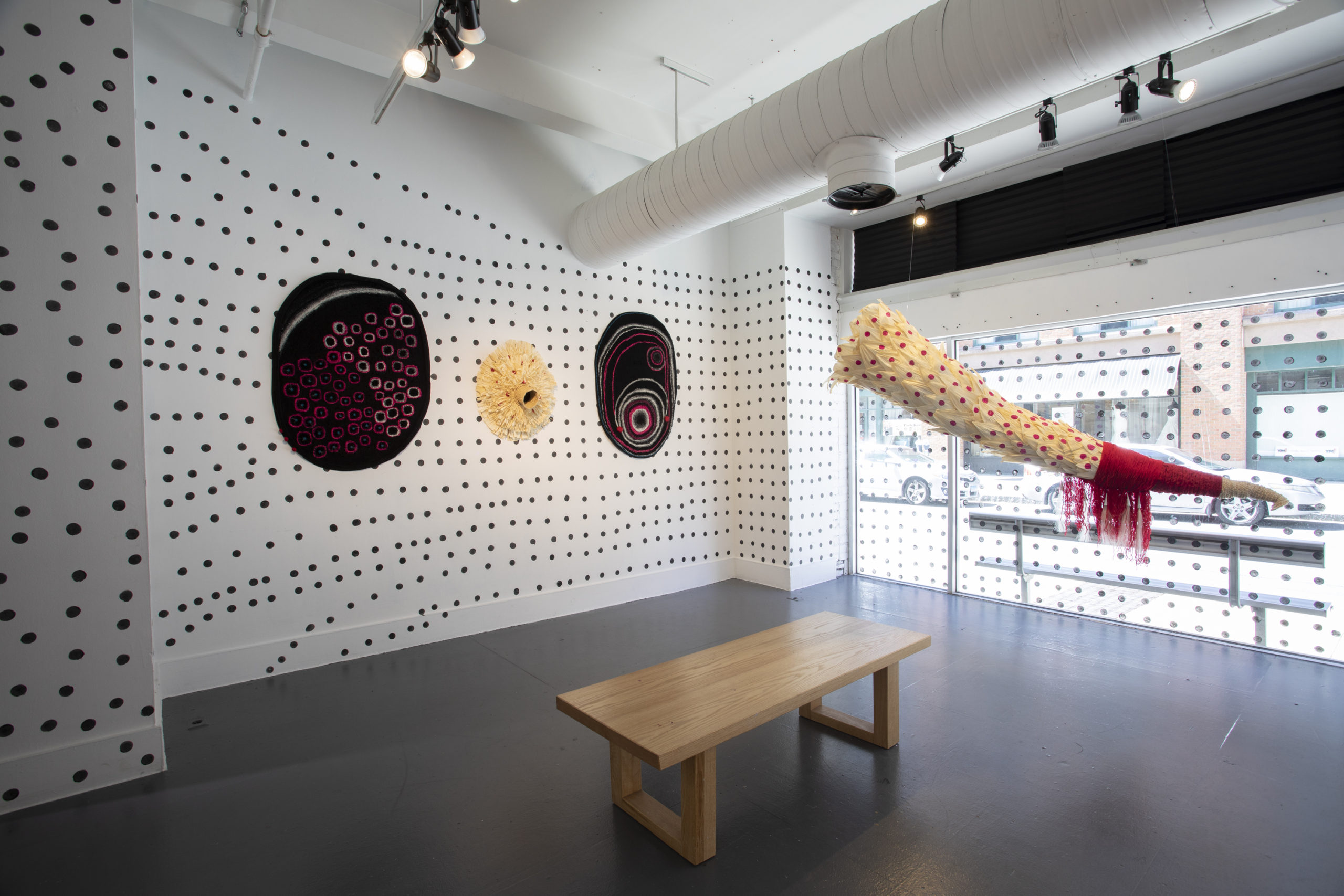 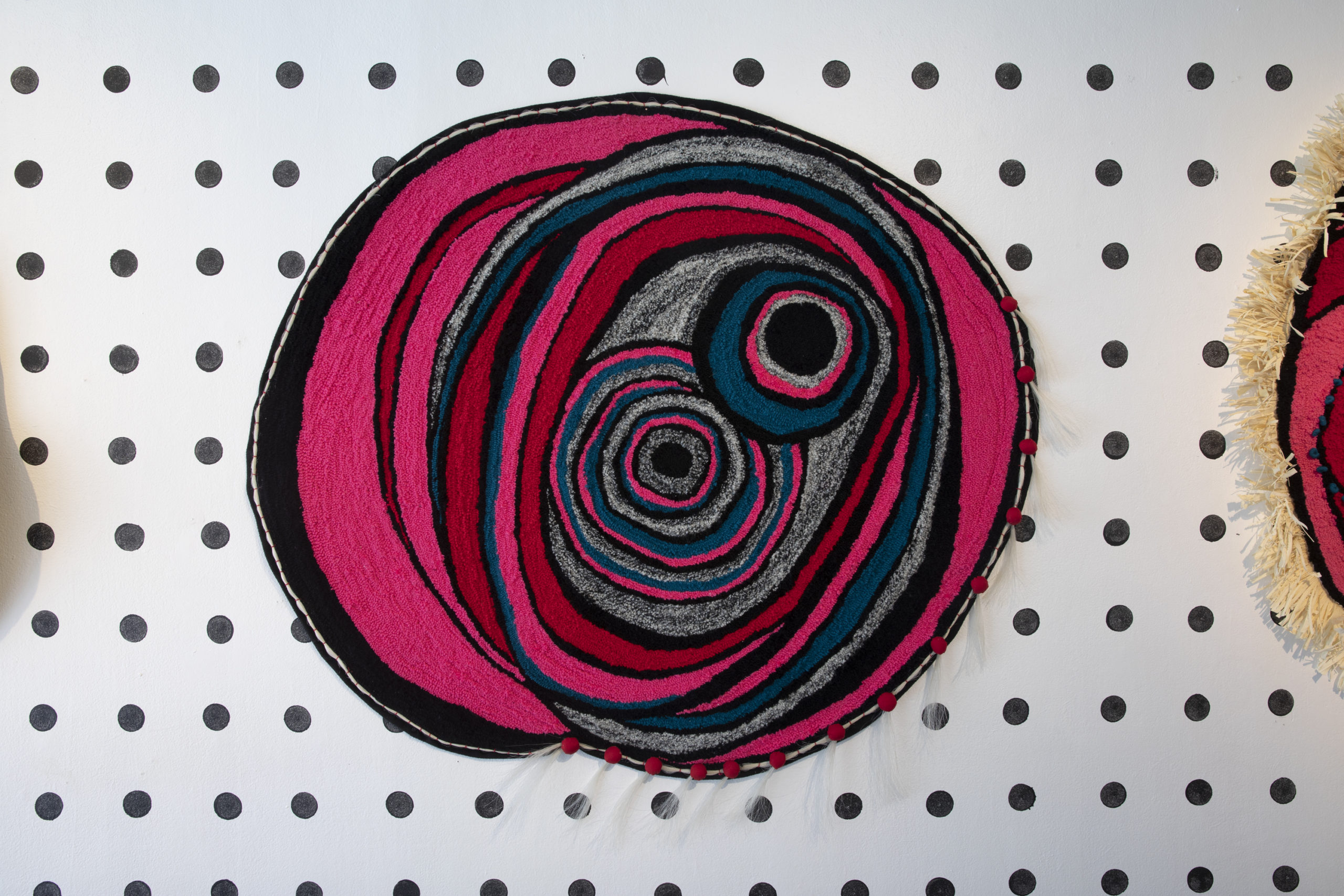 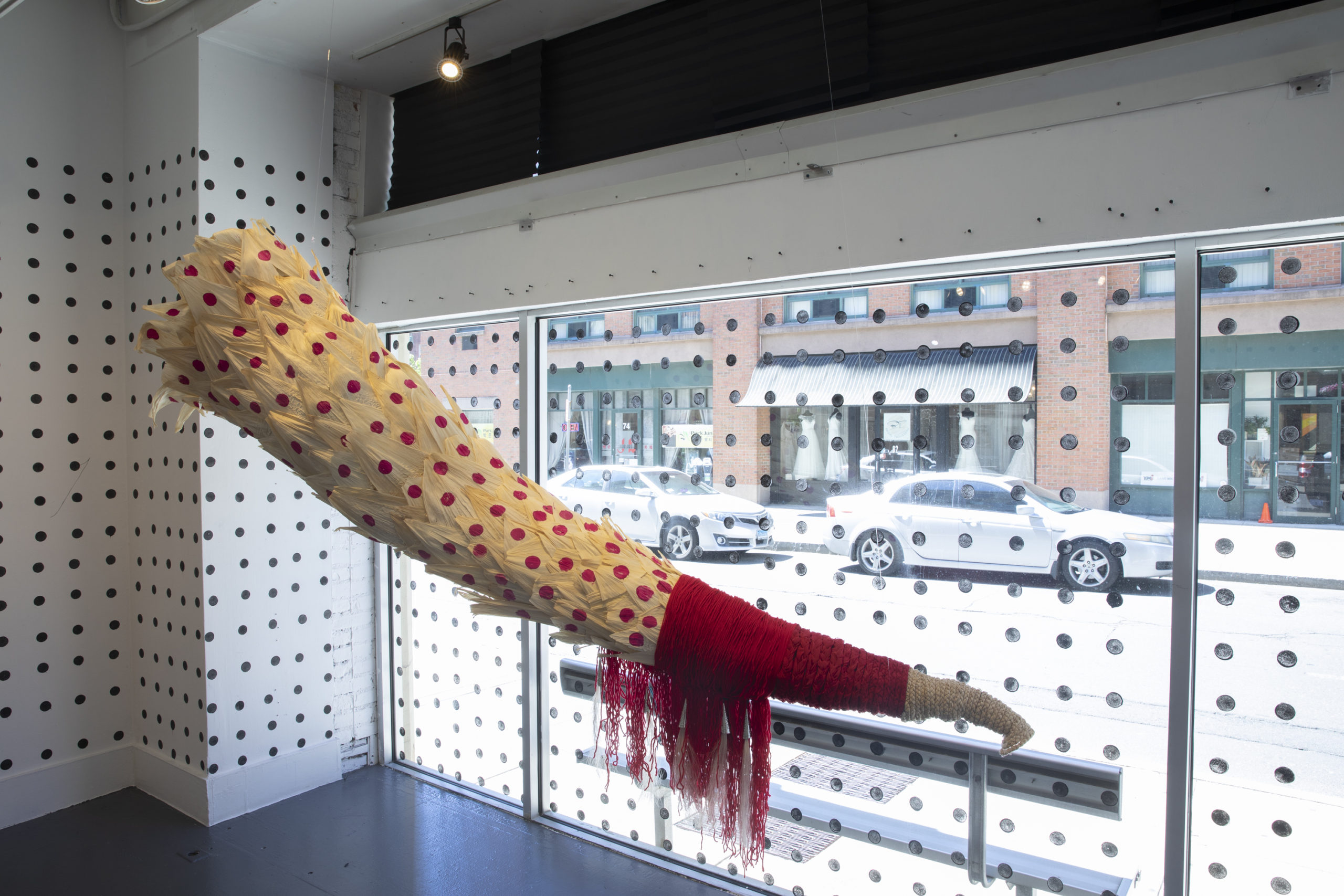 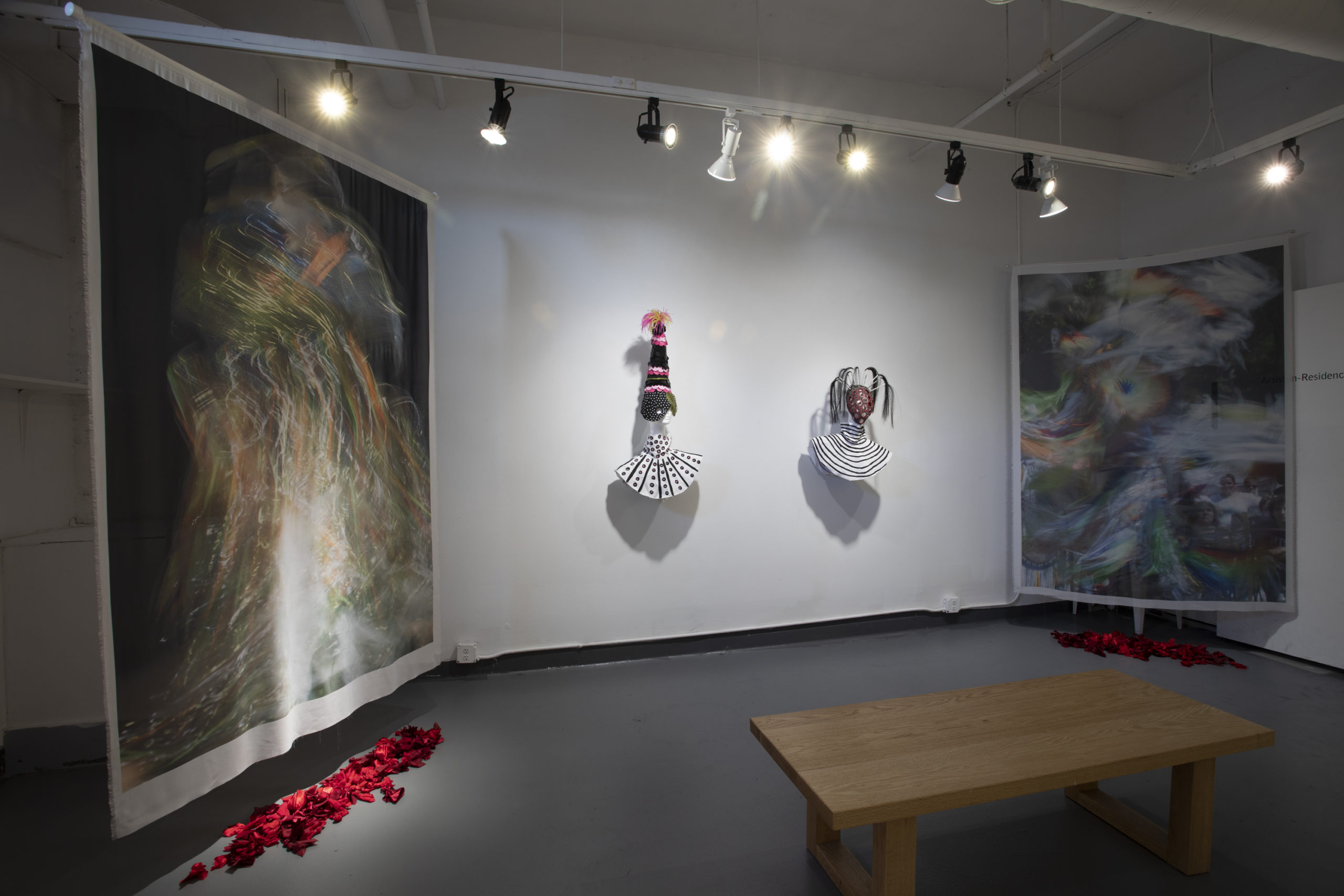 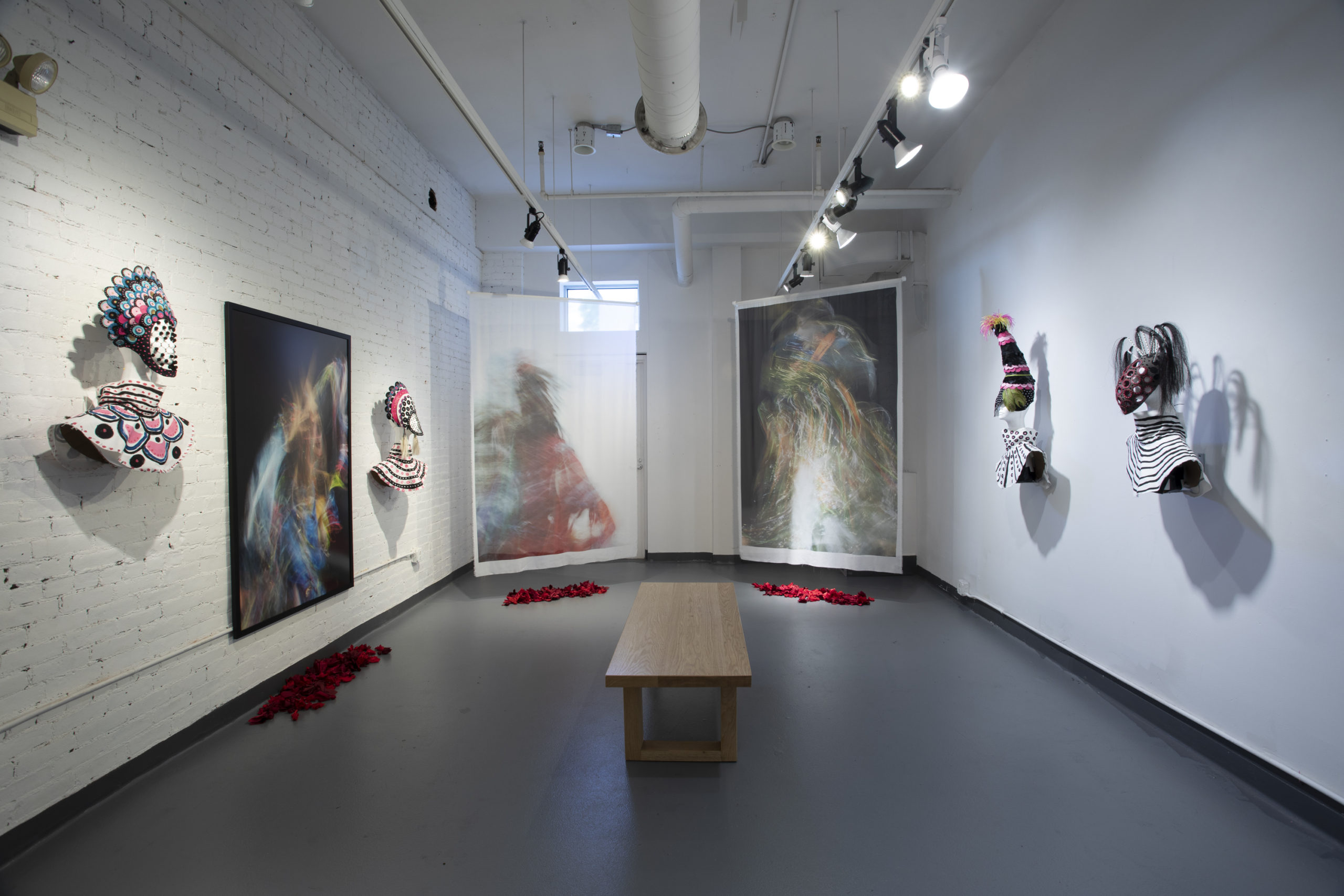 Everyone is the dream of their ancestors. —Erin Antonak

Artspace is very pleased to debut Seven Spans, a solo show of ten fiber and corn husk scaled sculptures by our current Artist-in-Residence, Erin Lee Antonak, and a collaborative installation with photographer Kim Weston.  Together, these new works contemplate indigenous identity and ritual, cosmological beliefs, survivance, methods for self-healing, the domestic landscape and the enduring strength of Native American traditions in daily life and artistic practice.   This exhibition will remain on view from May 19 to June 29, 2019, and feature a gathering, listening session and talk with the artists on Thursday, May 30 from 6-8pm.

Circular in shape and spiraling in design, Antonak’s new fiber works are dynamic meditations on how we might help ourselves heal and communicate with the past.  Their machine-like concentric circles lend to a modern feel that Antonak describes as both influenced by Native American art and regalia, and a handful of late career conceptual artists, including Lee Bontecou, Yayoi Kusama and Martin Puryear.  Their shape, color and form carry over design concepts realized in her recent body of wormhole-like drawings and wall paintings.  These optical portals offer tactile spaces for contemplation, meditation, entrance, time travel and a therapeutic (re)connection. The scent of orange essential oil fills the air.

Each work commemorates the life of one or more of the artist’s passed ancestors on her matriarchal line.  Antonak began this work with her deceased grandmother and mother, and two vibrant young sons in mind, as a way to come to a personal understanding of her relationship to the Seven Generations Principle, an ancient Iroquois philosophy, which believes that the decisions we make today will impact our family and natural surroundings seven generations into the future. Mapping this principle onto her own family tree, she realized with humbling awe, that she is connected to 252 grandparents, who ostensibly made life decisions with her happiness and security in mind.

For the exhibition, Antonak commemorates the stories of these 252 relatives, working with a genealogist to track down the names, birth places and stories of her more distant relatives.  She made seven mandalas from tufted rug fabric, leaning on her experiences as a milliner and costume designer, and two mandalas from braided cornhusks and muslin treaty cloth using techniques she learned from her mother. For generations, the women in Antonak’s family have sewn cornhusks into Ga’goh’sahs, sacred “False Face” masks which represent forest spirits assigned by the Creator to lend healing powers to human beings.  They prayed as they worked, so that their invocations might be passed on through the stitches.  The muslin is cloth annuities the members of her Nation still receive every year as part of the Treaty of Canandaigua signed in 1794, which is around the time Antonak’s 7th generation grandparents were alive. While Antonak does not intend these mandalas for ceremonial use, she creates them with the idea that they might serve as portals into past worlds, where she can receive direction, advise and prayers from her long-passed family members.

Occupying a separate gallery space, the collaborative installation, Space Rendered, offers visitors a second venue for meditation, contemplation, appreciation, comfort, metaphysical transportation and connection.  Inside, large time lapse photographs of intertribal dancers at powwows by Kim Weston float on fabric panels.  They are accompanied by healing masks and collars by Antonak.  This room is in dialogue with the Project Room space, fostering inward looking and routes for self-healing that do not rely on modern medicine. Amid these multisensory tableaus, visitors might find themselves nestling into an atmospheric vortex of ideas, shifting matter, wild scents, and the active dreams of our ancestors.  Let go.

This exhibition was made possible with generous support from The Andy Warhol Foundation for the Visual Arts and Friends of Artspace.

Erin Antonak is a Wolf Clan member of the Oneida Indian Nation of New York whose work explores identity and trauma and poses individual and collective methods for self-healing, self-soothing, mourning and mitigating loneliness. Her family was known for their use of traditional materials and they often made reproductions for museums throughout the US and Canada. She was taught to make traditional Iroquois crafts, regalia and ceremonial objects by her mother and her grandfather. Her grandfather, Shakowi, was also a tribal Chief and a healer. It was through him that she was exposed to the traditional ceremonies of her tribe.  She mixes her childhood exposure to Iroquois craft, regalia and ceremony with millinery techniques she learned as an apprentice in San Francisco, and costumes she designed for New Orleans’ drag communities in the early 2000s. Her work has been shown in North America, South America, Africa, Europe and Asia.

Kim Weston is a photographer of African American and Mohawk decent, whose work depicts scenes from intertribal powwows, which she attends with her family on the northeast coast.  Her diverse background has influenced her definition of art and its connectedness between people, objects, and ceremony. She questions how we perceive the world when illusions surround us. She works from the belief that art promotes presence and an opportunity to observe what’s true in our lives and the discrepancy in our everyday—while these layered photographic ideas are not always clear or grounded in reality, some images leave traces of time and space.