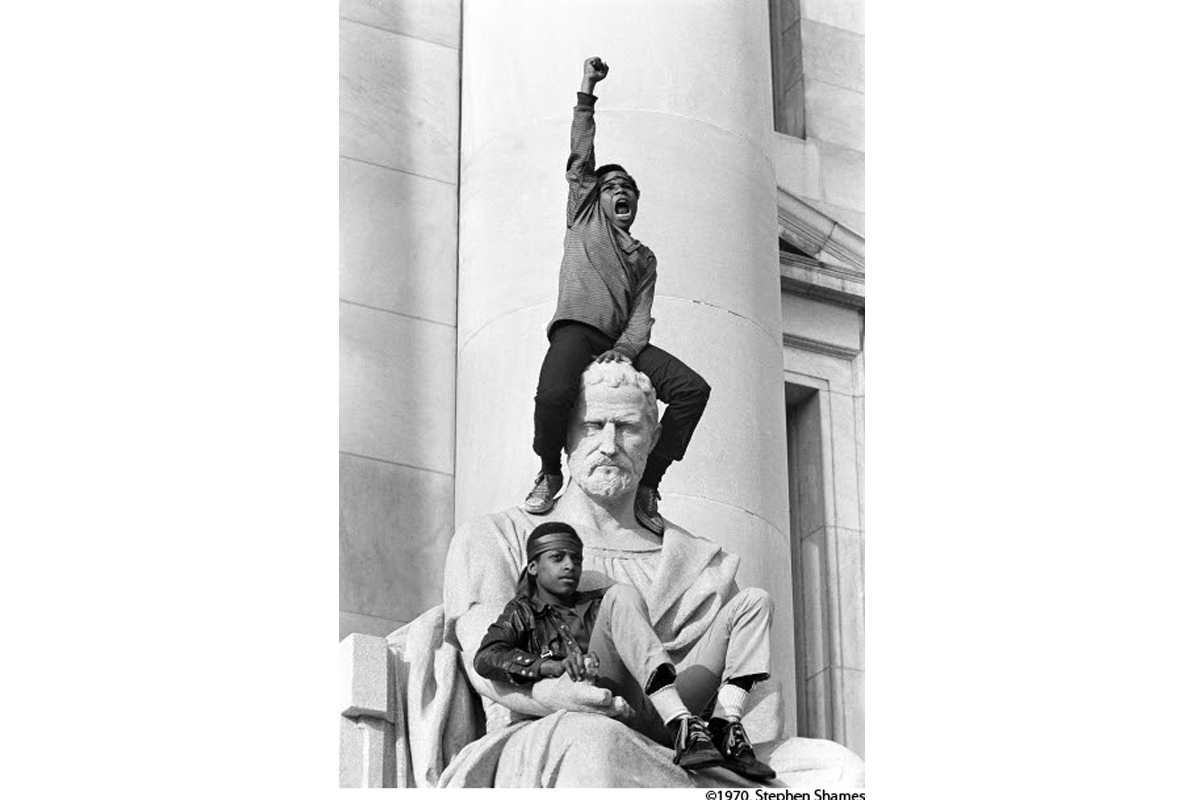 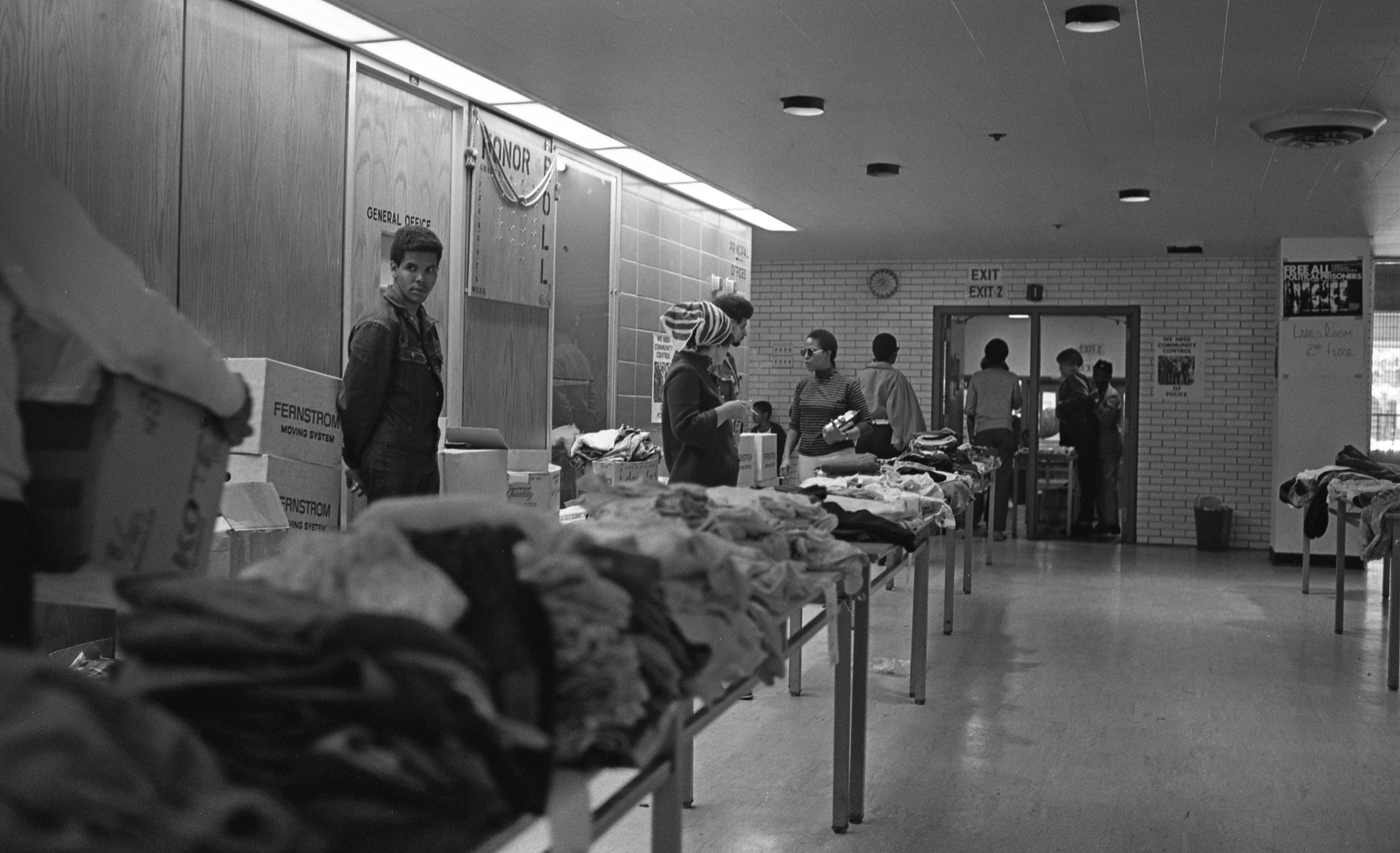 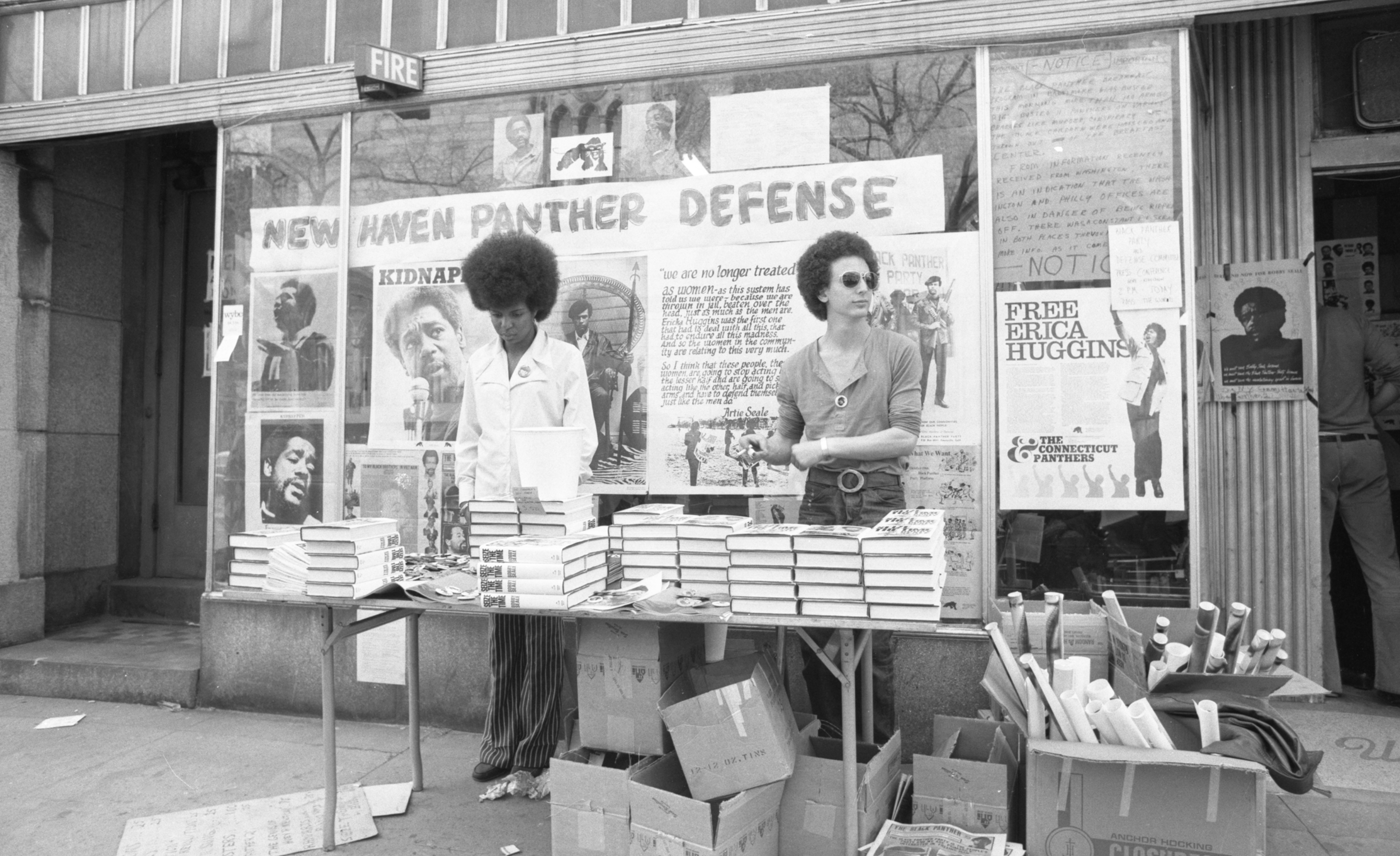 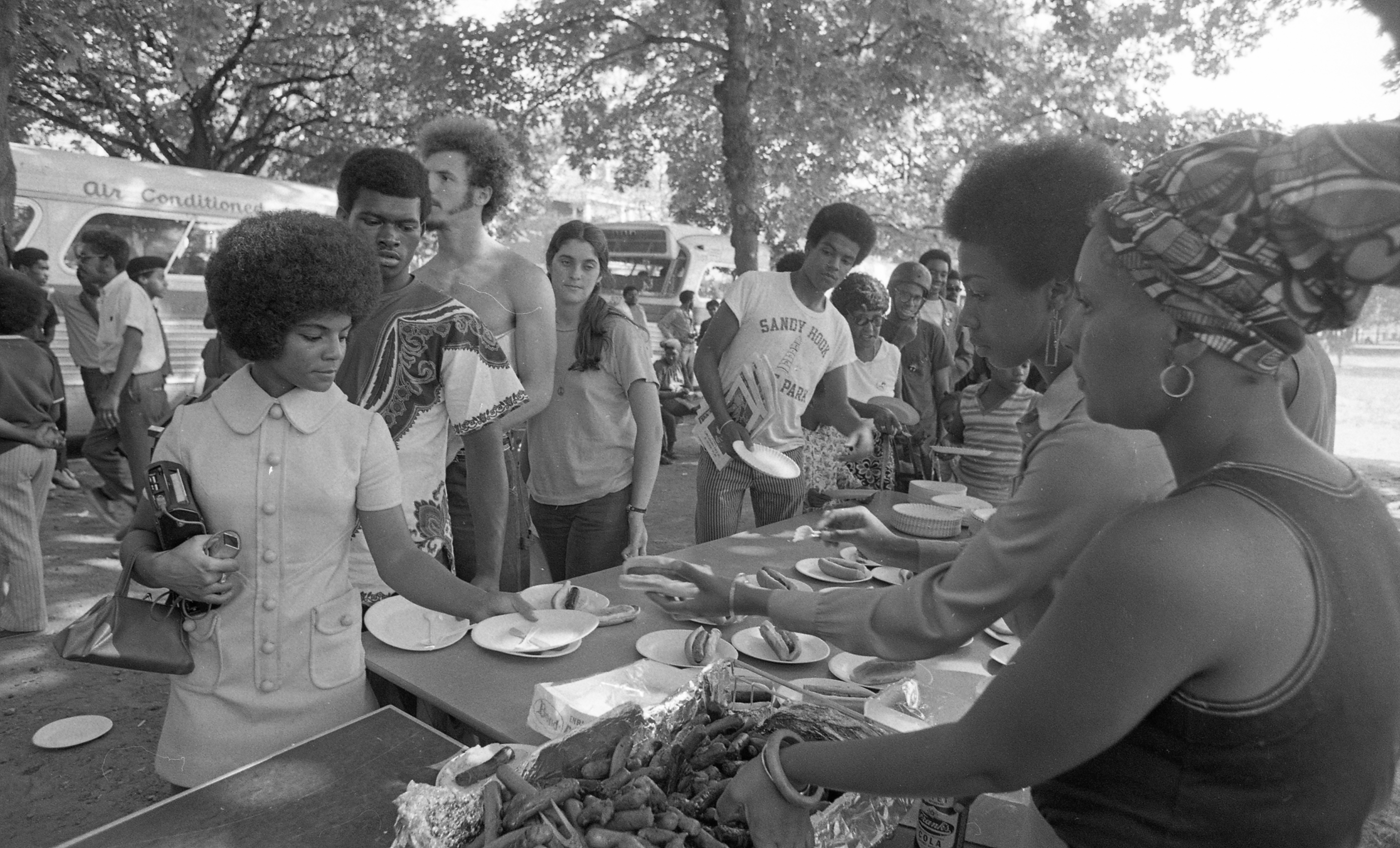 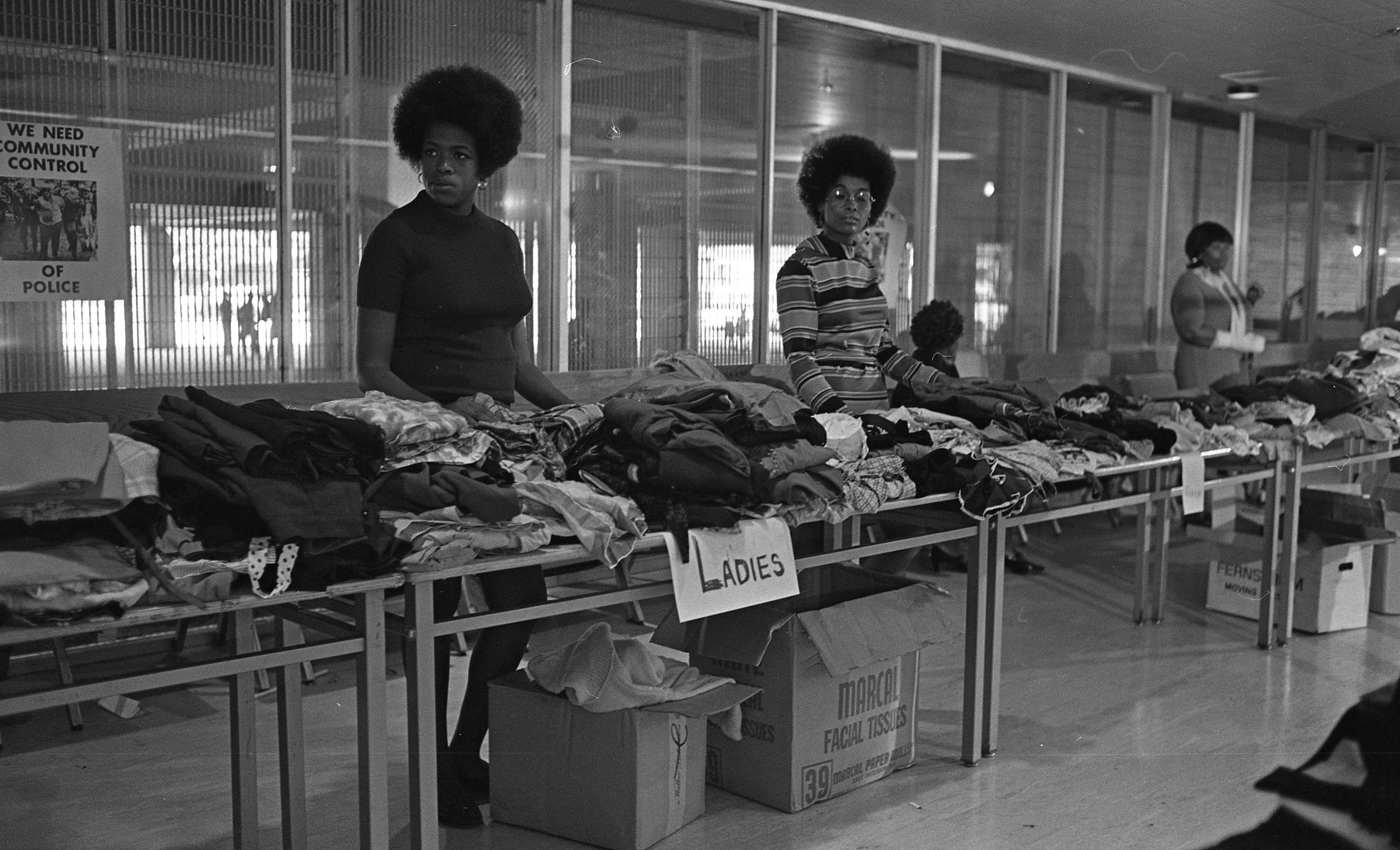 Curated by LaTanya Autry and Sarah Fritchey, with assistance from researcher Joshua Aiken.

This group exhibition recognizes the 50th anniversary, local histories and lasting legacies of the trial of Black Panther Party chairman, Bobby Seale, New Haven chapter founder, Ericka Huggins, and six other party members. While Seale and Huggins were acquitted of the murder of Panther member Alex Rackley, the 1970 case shook the city and exposed deep inequities in the legal system and wider social structures. Upon reflecting on this moment, Kingman Brewster, then Yale University President, questioned, “Is it possible for a “black revolutionary to achieve a fair trial anywhere in the United States?” May Day 20/20 takes up this concern and more as it reveals critical threads across then and now. In concert with New Haven’s vast archives and Yale’s research facilities, community members and local-area historians will serve as invaluable resources for the artists.

This project will also serve as the backdrop for Artspace’s 20th Summer Apprenticeship Program, lead by Daniel Pizarro.

This project is made possible thanks to a planning grant from the Connecticut Humanities Council, and support from the Public Welfare Foundation’s Art and Criminal Justice initiative. Additional support comes from the Grace Jones Richardson Trust.

We offered the following prompts as brainstorming points for the call for proposals:

How has our relationship with local, state and federal government changed or remained the same on a legislative, political and personal level?  How can artistic practice change legislation?  How can artists bridge the divide and create greater channels of communication between civilians and government officials? How might an artistic project put current criminal justice reform conversations in dialogue with the struggles of this May Day generation?

How can artistic practice transform a white cube gallery space into a place for learning about a historic watershed moment, by involving the details of the event, which are held in many public and privately held archives, and include news articles, legal correspondence, professional and amateur photographs, and video footage?  How can the archive be used to tell multiple stories, untold stories, and/or conflicting stories, while involving the voices of people today who were present and active within these histories?  The defendants, progressive lawyers, members of law enforcement, demonstrators and others who took part in the rally and trials are now in their late 60s or older, and those Panther Party elders who are still alive are now in their 80s. How can an artistic project provide a unique framework for hearing from this group?

How might an assessment of May Day deepen our community’s sense of identity?  We anticipate that for audiences it will be both a history lesson and poignant aesthetic experience. What social welfare programs did the BPP run?  What social service gaps did they fill?  What was their relationship to other community organizations working to provide food, shelter, medical equipment, clothing, schooling, education and after school care to underserved communities?

How might the fundamental legal questions from the trial serve as jumping off points for the create of a new work?  How did the Black Panther Party served a critical purpose in Connecticut by forcing white and black Americans and federal, state, and local authorities to confront issues of police brutality, racism, segregation through urban renewal, inequities in healthcare, and poverty?  How did their platform help reposition and advance the NAACP and The Urban League as efforts at the center of the black political spectrum?

How can public protest and community-based coalition-building shape public opinion on questions of clemency and mercy?

How does media visibility and language shift the narrative and sway public opinions on court trials as they unfold?

May Day 20/20 marks the 50th anniversary of the trial of Black Panther party chairman Bobby Seale, New Haven founder, Ericka Huggins, and seven other party members.  The defendants were tried for charges relating to the murder of Panther member Alex Rackley, and took place in the New Haven Courthouse between May 1-3, 1970. Against the backdrop of increasingly mediatized racial unrest, the Civil Rights Movement, the Vietnam War and other social problems, thousands of people traveled to New Haven’s Green to participate in a protest rally, organized by community members, internationally recognized activists and students.  Local merchants boarded up their stores and 4,000 National Guardsmen were ordered to maintain order. Yale student Kurt Schmolke, (who would become Mayor of Baltimore), argued that the University should suspend classes so that so that students, faculty, and staff could assist in preparing the community for the rally. The University opened its doors to demonstrators by offering shelter, food, day care, and first aid throughout the weekend.

A few months later, Seale was acquitted, after the jury failed to reach a verdict, deadlocked 11 to 1 for Seale’s acquittal and 10 to 2 for Huggins’ acquittal.  In his closing statements, Judge Harold Mulvey said, “I find it impossible to believe that an unbiased jury could be selected without superhuman efforts — efforts which this court, the state and these defendants should not be called upon either to make or to endure”.  Days before the trial, Yale President Kingman Brewster echoed the judge’s skepticism in a TV interview, asking the nation, “Is it possible for a “black revolutionary to achieve a fair trial anywhere in the United States?”  This question was never fully answered and remains on the table today, and despite Seale’s and Huggins’s acquittal, by 1974, the Black Panther Party shut down, a victim of aggressive government surveillance, suppression, and propaganda.

It is with these quotes and others that we seek to explore the local histories and lasting legacies of the New Haven chapter of the Black Panther Party and the May Day trial as they unfolded in our city before, during and after the trial.  While over 30 books have been written about May Day over the past five decades, Artspace seeks activate our local histories in a contemporary context with artists in the driver seats.

LaTanya S. Autry is the Gund Curatorial Fellow at the Museum of Contemporary Art Cleveland. As a cultural organizer in the visual arts, LaTanya places social justice and public memory at the nexus of her work. In addition to co-creating The Art of Black Dissent, an interactive program that promotes public dialogue about the Black liberation struggle, she co-produces #MuseumsAreNotNeutral, an initiative that exposes the fallacies of the “neutrality claim” made by many museums. She is completing her Ph.D. at University of Delaware. Through her dissertation entitled “The Crossroads of Commemoration: Lynching Landscapes in America” she concentrates on the interplay of race, representation, memory, and public space as she analyzes how individuals and communities memorialize lynching violence in the built environment.  LaTanya has curated exhibitions and organized programs at Yale University Art Gallery, Museum of Contemporary Art Cleveland, Mississippi Museum of Art, and other arts organizations.

Sarah M. Fritchey is the Curator and Gallery Director at Artspace.  Her research-driven practice explores the ideologies of place, desire, identity and belonging, especially as they relate to and are shaped by acts of colonization, privatization and erasure.  Driven by the notion that “one place understood helps us understand all places better,” she orients a deep consideration of local histories, and engagement with local communities as starting points for new work. Since 2014, she has cultivated Artspace as a site for cultural exchange, debate, education and experimentation, mobilizing conversations between artists, scholars and individuals working in the fields of health care, law, environmental justice, design and architecture.  She holds an M.A. in Curatorial Studies from CCS Bard and a B.A. in Comparative Literature and Studio Practice from Hamilton College. Outside of Artspace, she has curated projects at UMass/Amherst, Queens College, the African American Museum in Philadelphia, the Hessel Museum of Art, and Franklin Street Works, and contributed to Artforum, Hyperlllergic, Art New England Magazine and other publications.

Curated by LaTanya Autry and Sarah Fritchey, with assistance from researcher Joshua Aiken.